8 Facts About Persian Cats, Kings of the Lap-Nappers

8 Facts About Persian Cats, Kings of the Lap-Nappers ...
animals.howstuffworks.com 05/11/2019 Nature 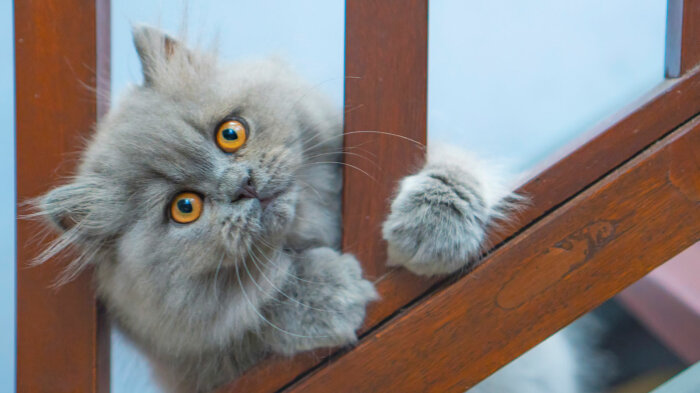 by Dave Roos Nov 5, 2019
Persians are friendly fluffy felines and one of the earliest pedigreed cats. Kryssia Campos/Getty Images

* * * Easily recognizable for their long, luxurious coats and big, expressive eyes, Persians are one of the most popular cat breeds in the world. According to the Cat Fanciers' Association (CFA), the world's largest registry of pedigreed cats, Persians were the fourth most-registered breed in 2018. Here are eight purr-fectly fun facts about these friendly felines.
1. Persian Cats Came From Persia ... Possibly
The exact origins of the Persian cat are obscure. But they came to the attention of Europeans when diplomats stationed in the Middle East brought the first long-haired cats back to England and other European countries in the mid-1800s. These were immediately prized for their exotic looks and named for their presumed homelands. Two of the best-known were Persians from Iran (seat of the ancient Persian Empire) and Angoras named for Ankara in Turkey. These long-haired beauties were an immediate hit with Westerners.
2. They Have an Old-school Pedigree
Purebred cats closely followed the creation of the first kennel clubs in Europe in the mid-19th century. The world's first cat show was held in London's Crystal Palace in 1871, and the first purebred Persians arrived in the United States around 1875. The rise of cat breeding houses on both sides of the Atlantic at the turn of the 20th century was largely driven by the popularity of the Persian, considered one of the earliest pedigreed cats.
3. It All Starts With the Hair
Persians have long, thick coats with individual hairs 4-6 inches (10-15 centimeters) in length. The colors of their coat run the full spectrum from solid, snowy white to wild, multi-tone combinations of tabby, tortoiseshell, patches and more.
Then there's the face. Unlike Egyptian or Siamese cats with long sleek noses, Persians have flat, open faces with tiny button noses. Their richly colored eyes, close set against this wee nose, look extra big and expressive. The curved, pansy-shape of their cheeks accentuates their small, triangular mouths.
Persians have compact bodies with short, heavy-boned legs and medium-length tails.
4. Persians Are as Friendly as Dogs – But Lazy, Too
Persians are popular for more than their good looks. They're also exceptionally friendly ... for a cat.
"Most cats are affectionate on their own terms," says Susan MacArthur, who's been breeding Persians at Pelaqita Persians for 20 years. "We call Persians 'dog cats,' because they really like people. They also do things that normal cats don't do."
Persians will run to the door to greet visitors and even come when they're called by name, a doggy trick that most cats feel is beneath them. Persians are also known to be "talkative," chatting with their owners in a sing-songy meow.
But don't get the idea that Persians are overly active animals.
"They are the laziest breed in the world," says MacArthur. "They literally sleep 20 hours a day. Even the kittens don't play very much."
But that's just fine with Persian fans. Their laid-back, lap-napping style means that Persians are less likely to hop up on counters and rummage through cabinets searching for food.
5. That Coat Doesn't Comb Itself
Persians might be laid-back, but their fur is famously high maintenance. If you're going to buy a long-haired breed like a Persian, expect to comb its hair every single day. 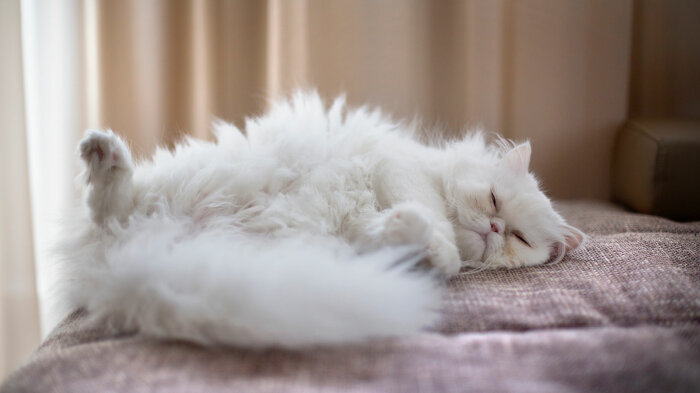 Like all Persians, this white Persian is blessed with a ton of long hair that must be combed regularly.

* * * Stefka Pavlova/Getty Images
"Because their coat is long and slightly greasy, Persians get mats [clumps or knots of hair] very quickly under their armpits, behind their hind legs and behind their ears," says MacArthur. "If you don't comb them once a day, in a week you'll have little mats."
And while short-haired housecats can be left to lick themselves clean, a purebred Persian should be bathed regularly. Breeders like MacArthur start bathing her kittens early to accustom them to weekly scrubbings.
The upside of all that combing and shampooing is that your Persian will shed less.
6. They're Not Feline Einsteins
Cats are notoriously crafty, wily and smart. Before raising Persians, MacArthur bred German Shepherds, one of the most intelligent dogs on the planet.
"I was very surprised once I got into breeding and showing cats how smart they are. I actually feel they're smarter than dogs," says MacArthur. "That being said, Persians are stupid."
Maybe stupid is too strong of a word. They're just a little slower to reach developmental milestones than other breeds. MacArthur says that even at 8 weeks old, she'll have kittens who still haven't figured out the litter box.
On top of that, Persians just aren't natural predators and hunters. In her 20 years of breeding Persians, which means having 10 or more cats in the house at a given time, MacArthur says not one has caught a mouse or shown any interest in chasing critters.
With their sedentary temperaments, and all that long luscious hair, Persians are indoor cats for sure.
7. Their Coats Are a Rainbow of Cat Colors
The Cat Fanciers' Association recognizes seven different categories (or divisions) of Persians: solid; silver and golden; smoke and shaded; tabby; particolor; bicolor and Himalayan. 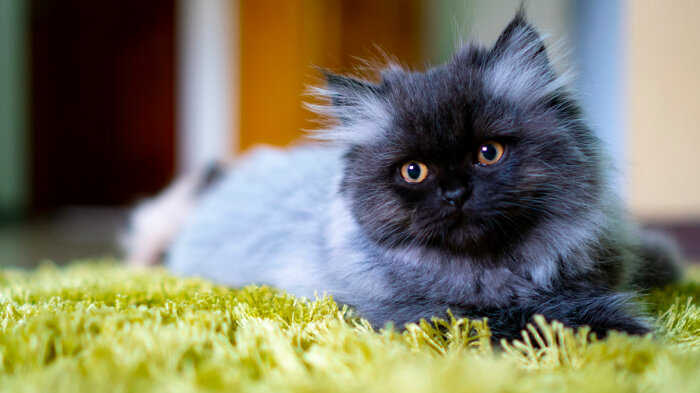 This black smoke Persian exemplifies one of the many colors of Persian cats.

* * * Kryssia Campos/Getty Images
But within those seven categories are a near-endless combination of hair colors and patterns: chocolate, red, blue, lilac, cream, tortoiseshell, tabby, calico and more. MacArthur says that if she breeds certain varieties of Persians, the kittens are capable of producing 30 different color combinations. "It's always a surprise," she says.
8. They'll Live a Good Long Life
Unlike some purebred dogs, which are predisposed to a host of health issues, Persians are generally free of genetic issues. The one exception is a condition called polycystic kidney disease. But thanks to inexpensive genetic testing, most breeders have been able to eliminate the PKD-1 gene from their breeding stock.
Even though they have pug-like flattened faces, Persians don't typically suffer from breathing issues. There are certain varieties of Persians with extremely short skulls and almost no nasal bones called "ultraPersians" that can suffer from a breathing condition known as brachycephaly.
Because of their compact hips, purebred Persian moms give birth to relatively small litters, between two and six kittens per birth, says MacArthur, and the breed usually has a life span of 15 to 18 years.
9. They Cost a Bundle
It's a good thing these cats have long lives, since they're not cheap. At Pelaqita Persians, a pet-quality Persian kitten costs between $900 and $2,000. Those kittens come spayed or neutered, and microchipped. Breeder-quality and show-quality kittens are sold "intact," meaning they haven't been fixed. Those animals start at $1,500 and go as high as $3,000 for a high-quality male. All purebred animals are registered with the CFA with their full pedigree.
Now That's Cool
The popular Himalayan variety of Persians was a result of crossing Persians with Siamese cats. Show-quality Himalayans are required to have vivid blue eyes.

Related articles based on keyword density

ISIS: The Spoils of the "Great Loot" in the Middle East - FPIF...

fpif.org 02/07/2014 Politics
Adding yet more warfare to the current crisis in the Middle East will perpetuate exactly what the imperial powers set out to do: tear an entire region...View Details»

The 5 Most Powerful Empires in History | The National Interest...
nationalinterest.org 22/02/2015 History
Akhilesh Pillalamarri February 22, 2015 Of all the empires that arose and thrived on the face of this earth, which were the five most powerful? And h...View Details»

Looking for Ethnicity in Iran...

The power of the Persian’s faith: Beauty of the Pleiades...

aucegypt.edu 23/10/2013 News
Turki Al-Faisal October 22, 2013 There is a tradition that states that the Prophet Muhammad, (PBUH), once gestured towards his Persian companion S...View Details»